Cottage Chic on the Beach 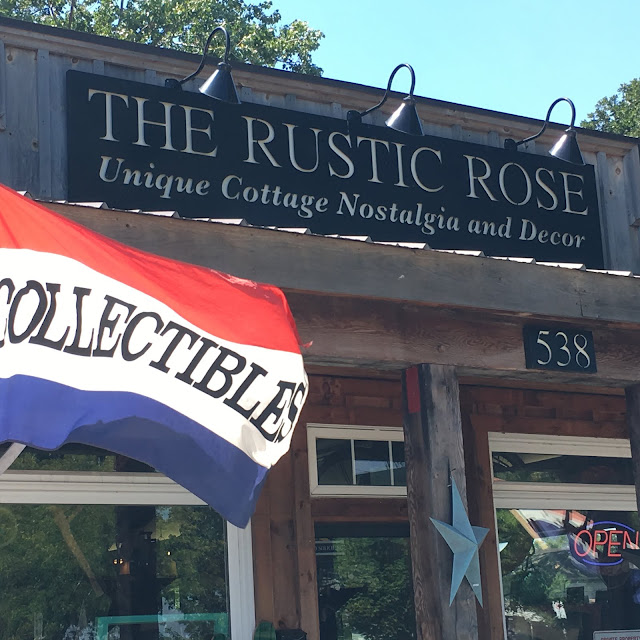 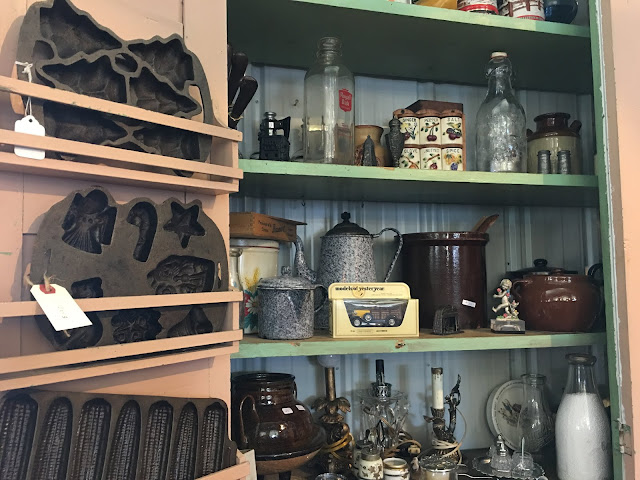 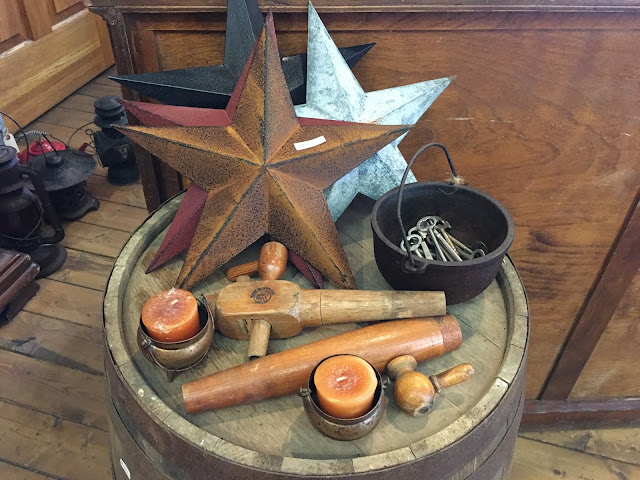 When people walk into The Rustic Rose they can’t get enough of the barn lanterns, weathered wood mallets, and peculiar tools.  “Stuff that comes out of the barn or shop, that’s what’s trendy now,” says Eileen Breukelman owner of the cottage nostalgia and décor store on the Hamilton Beach Strip.
Eileen and her husband Jeff opened The Rustic Rose five years ago, just as the Beach was entering a new residential growth spurt with high priced homes and condos. They bought the building at 538 Beach Boulevard because “the price was right” but were convinced they could never lose on a place so close to the water.
Nautical nostalgia was the first focus at the store with old wooden buoys and vintage life preservers snapped up by customers living on the Beach. As the collection grew, the couple kept their focus tight and the store curated with a specific vision. Beautiful old tools, vintage Le Creuset cookware, wooden butter and cheese boxes, fishing reels and cheerful picnic ware speak of a simpler time.  What’s striking about so many of the pieces is the colour, the oranges, blues, and sunflower yellow found on bicycles, tool handles, and old toys. “If people buy wood pieces I tell them not to refinish or paint, leave the original colour,” Jeff says.
Some customers come in once a month to see what’s new, and more are coming from Toronto, “Many of our pieces are perfect for a condo, the patina of the wood, the colour, it warms up modern, industrial style spaces,” Eileen says. She points to a tin rocking horse sitting high on a shelf, “If you had the room, that would be perfect in an entrance way.”
When the Breukelman’s go looking for new finds for their store, they consider it a holiday. Heading out in their truck, maybe with one of their seven children along for the trip, they search all over Ontario and in to the States for treasures. At auctions, antique malls, and outdoor markets Jeff says they “can see past the dirt for a potential nostalgic "wow" piece.”
Old wood construction ladders are hot right now according to Eileen. People use them as a place to hang quilts or display other accessories. Multi-pane antique windows are in demand too she says, “We have customers who use them as frames for family photos.”  If pieces need repair, Jeff does the work, fitting it in around his full time business Jef-Re Construction Services specializing in foundation repair and industrial flooring.
You won’t find fussy china, or fine furniture at The Rustic Rose but you will find crates of old license plates. Vintage car owners like to find ones that match the year of their vehicle. Beautiful metal chocolate molds become a work of art on the wall, and duck decoys never go out of style.  Eileen likes to see what her customers do with the pieces when they get them home.  “People post great ideas to our Facebook page.”
The Rustic Rose (appleroses.com) is open four days a week. The rest of the time Eileen is looking for new vintage pieces, raising kids or making handcrafted roses from apples. “That’s how it started, I was looking for studio space to make the roses, and then we started displaying vintage pieces when we ran out of room in our house.”
So the shop is full of the cottage chic stuff they love, and there’s only one piece they are tempted to keep for home says Jeff. “The metal horse, if it doesn’t sell, it’s going in our house.”
http://www.thespec.com/living-story/6883631-cottage-chic-on-the-beach/

A Personal Touch in a Public Park

A Personal Touch in a Public Park
by Kathy Renwald

Published in the Hamilton Spectator
September 1, 2016 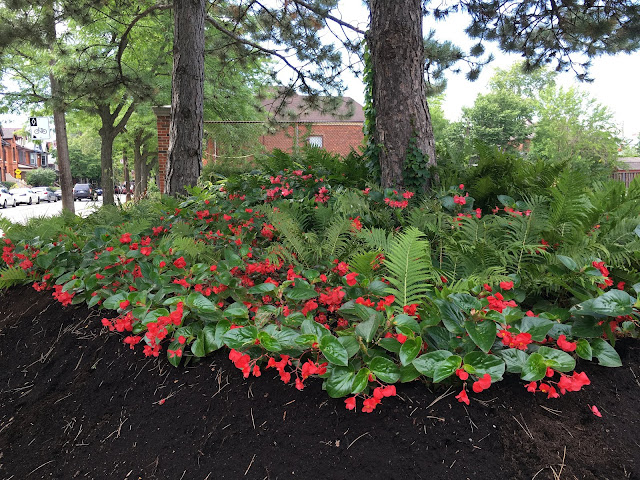 During this steamy, sweaty summer we all look for a place where we won’t get fried. It could be a pool, the lake or a park. The lucky people in the Kirkendall Neighborhood have the HAAA Grounds. The sporting history is deep at the Hamilton Amateur Athletic Association Grounds, home of the old Hamilton Tigers, the site of seven Grey Cup Games, and base for the Hamilton Hurricanes football team for over 30 years.
Beyond the hurtling bodies, the HAAA grounds is a park, and many would say one of the best maintained in the city. It’s a public park with a personal touch.
Drive or walk along Charlton Avenue West and beautiful flowerbeds weave underneath groves of Austrian pines. Begonias, daylilies, ferns and hostas nestle in soil as dark as coffee grounds. You can tell this garden is loved. Even driving by at the posted speed limit it’s obvious these beds are edged by a master. The line is sharp, the soil slants at what seems like an impossible angle, and weeds are forbidden.
For several years I’ve made feeble attempts to find the gardener at the HAAA Grounds, but I searched too late in the day. The gardener, I was told, starts work at 6 a.m. So one sultry morning at 8 a.m. I knock on the door of
the pretty, brick HAAA building and meet Frank Liberatore. I barely have time to introduce myself and say how much I admire the gardens before he grabs a spade. “Let me show you how to edge,” he says
Liberatore has been in charge at HAA for 11 years, and with the City of Hamilton for 36, “I rolled out the sod at Pier 4 Park by hand, he says, remembering the start of the West Harbour development. The HAAA Grounds has a running track, kids play area, and the field for soccer and football, with the intense activity it’s impressive that the gardens are so pristine.
“It was never like this before Frank came here,” Arlene Laframboise says as she strolls through the park with her Basset Hound. Liberatore has popped inside to get treats for her dog. “He so nice to the dogs, and the park is immaculate. If you see litter or broken glass at night, by 7 a.m. it’s gone, we’re so lucky to have him.”
Each spring Liberatore starts the season by putting 10 inches of new loam on top of the flowerbeds. It’s a necessity since the trees suck up so much of the soil and moisture. He cleans up the left over perennials, cultivates and waits for the annuals to arrive from the city greenhouse, before planting about May 24th. Through the summer the watering, weeding, cultivating, sports field maintenance and general cleanup continues. “I can cultivate and weed all the beds in about two-and-a-half hours,” he says. Though he has help from summer students, I could speculate that at age 66 he is working faster than most. “I still play soccer, but it’s in an old guy’s league.”
Sitting on a bench in the shade of a locust tree is the best way to appreciate the HAAA Grounds. Kids laughter bubbles up from the playground, pleasant thunks drift over from the Hamilton Tennis Club, and dogs scuffle by hoping to see Liberatore with an outstretched hand.
“I love my job,” he says looking out over the begonias in their fluffy beds and the Trillium Award he won last year.
In late fall he’ll leave HAAA for winter work, clearing snow at city hall, and shoveling it off the mountain access stairs, doing the physical work he enjoys. Then in February he’ll return with his meticulous ways to the park he loves where his two and four-legged fans wait for signs of spring.